The boarding was silent and serene, some sleeping and snoring students, still unaware that it was already 10:30 AM, time for teacher-boarder games! A few students had reshened up early while a few were still sleepy listening to the instructions given by Mr. Shane Browne, our boarding parent. Music blared out of the neatly set up audio system, as an atmosphere of festivity rushed through the boarding hallways, and the teachers; Mr. Dirk, Mr. and Mrs.King, Mrs. Dubay, Mr. Dan, Mrs. Diana, Mrs. Mari, had arrived already.


After having a brief introduction by Mr. Regis, all the teams, Foxes, Lions, Rhinos, Bulls, Tigers &Tuskers, rushed to their respective venues. The activities that my team had to face first, although different teams started off with Different games each, was the Group Rope-Skipping.        This activity helped in team building and coordination because to get points all the team members, and I mean ALL, had to jump at the same time, as many times as possible in a row, since only consecutive skips were awarded points. The next challenge was the Ice Bucket Challenge, putting willing students through a form of hydro torture (just so I don't worry you… it was a hyperbole!) asking them to reach in a bucket of ice water and unscrew as many bolts from screws placed in the bucket. The Cups & Marbles Challenge was one of the easiest, which competitive teams used to overcome their deficit. My team was made to stand in a line, cups tied to the tip of their nose, and made to bring marbles from one end to the other end of the line, snatching points quickly was the aim. The Pictionary Challenge, being a popular game, was second nature to quite a few students, who were soaking up the limelight showing off their art skills. I think it was a cool day, having fun with teachers!


My team, Lions did the Balloon Bursting Challenge. This game was about team coordination. Unfortunately, we had the least number of team members and some of us didn't know how to tie a ballon…., but we didn't give up and we overcame such disadvantages and finished 3rd place.Then we went to the Charades Challenge corner, a game in which one of our member is supposed to act and others have to guess the movie.The best and most emotive actor in our team was Mr.Ragush sir (boarding manager). After the charades it came down to the final event -The Bomb Disposal Challenge.This game being all about team work and leadership, basically all the 7 people have to hold on to 7 ropes connected to a ring. A tennis ball is placed on top of the ring. We were supposed to carry the ball to the other end and place it on a bottle top without dropping it. The leader should be outside and help the team to complete the game.The winner of the game gets 100 points.When the whistle was blown we started slow, but we picked up the pace quicker than the other teams and we finished 1st place. After the game, we were told to assemble back to the boarding. Mr.Regis started speaking, thanking the wonderful teachers who helped us overcome the hurdles by becoming part of our team.Then he announced the results in which we finished 1st place. We were so ecstatic! One thing I learned from this activity was that the size of the team doesn't matter it's all about the teamwork, despite being the smallest team we finished winners! Before saying farewell to each other we were treated with ice creams from the tuck shop, Yeah!. 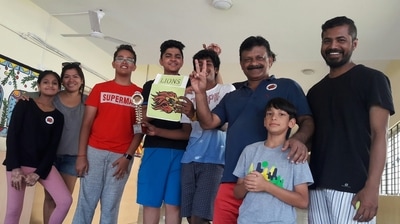 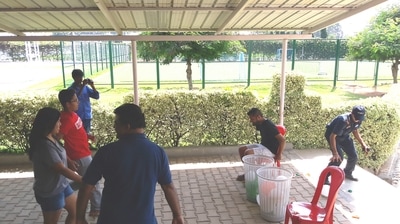 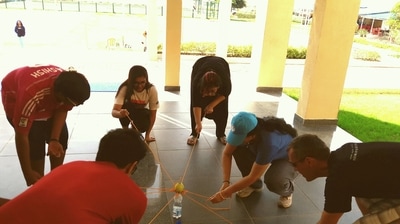 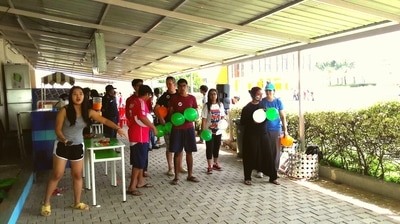 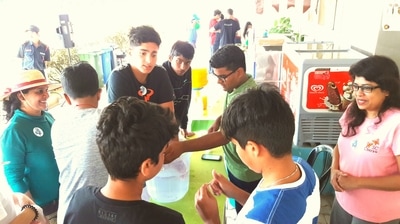 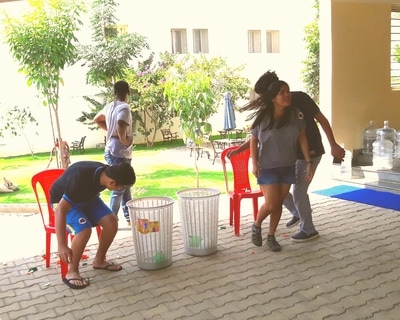 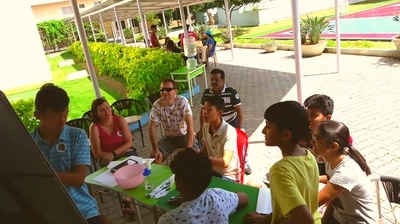 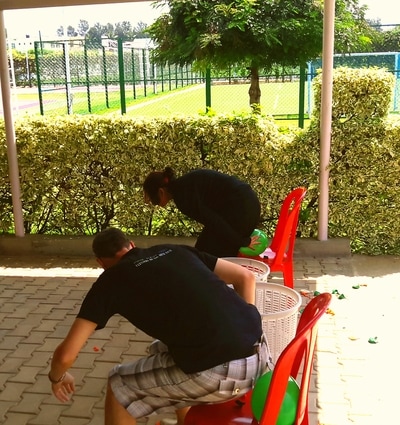 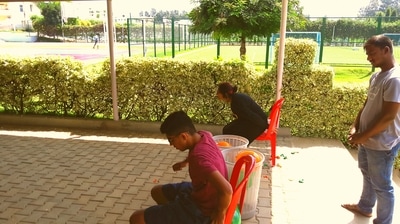 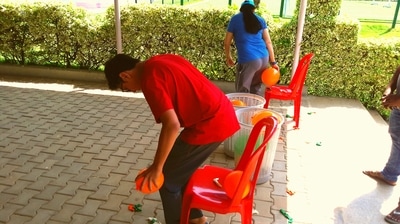 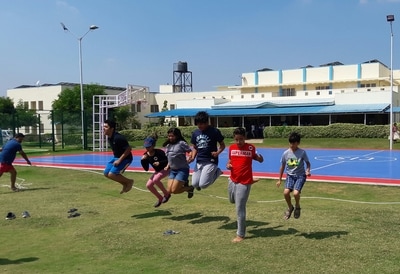 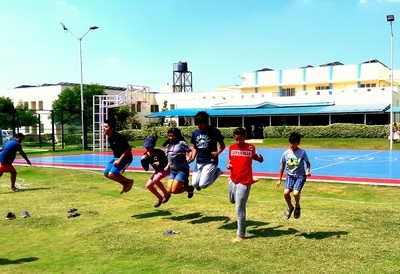 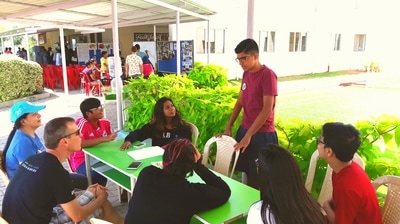 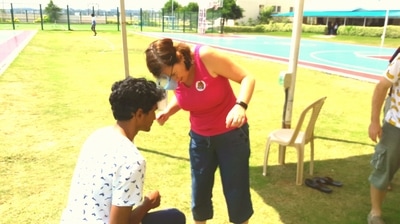 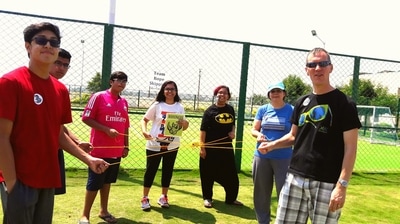 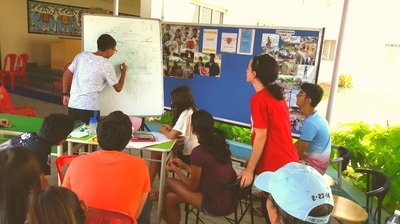 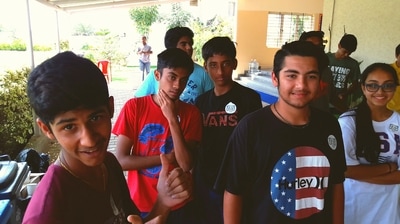 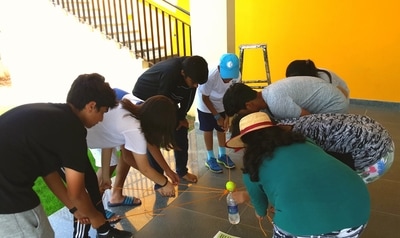 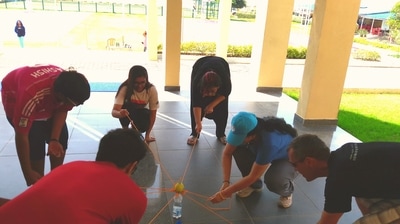 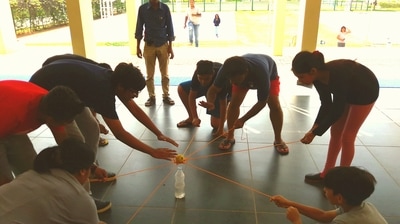 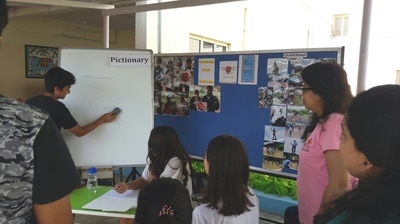 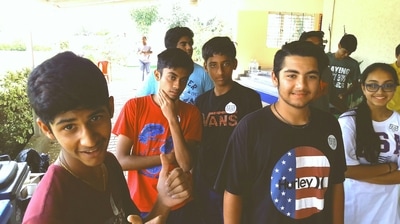 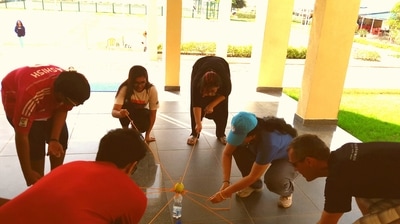 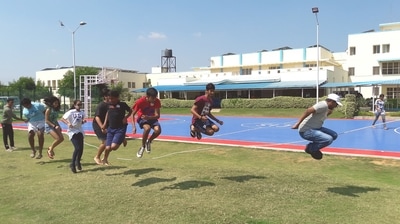